Between 2 worlds! Firefox and Chrome

Why can't people get together and build a product that has only "good" features! But the world is not like that..is it? I switch back and forth between Firefox and Chrome due to this very reason. I like them and hate them at the same time.

Remarkably, my list of likes and dislikes is not so long. There are only one or two things that I dislike about these products but they have a very big impact in my (I think everyone else's too) browsing habits.

These are the specific things that gets on my nerves. While these may not effect other people, they directly collide with my web usage.

Then I have the things which makes Chrome better than Firefox.
Unfortunately, I don't have anything that makes Firefox stand out on Chrome. So right now there are 2 things that could make this world a better place:
I believe any of these things will produce a completely good browser. Personally I like the 2nd choice because I prefer Chrome due to its simpleness.

Thanks Kasun for pointing out this feature to me.

If you are a torrent downloader and a person who needs to switch between Windows and Ubuntu frequently, you need to continuously download your torrents from both operating systems. Most torrent clients facilitates this requirement. I'm going to demonstrate this feature using 2 bittorrent clients named, uTorrent (Windows) and Transmission (Ubuntu). But this can be applied on any modern torrent client.

What actually happens here is each client starts downloading from where the other client left off. Obviously for this, both clients must save the files to the same location on the hard disk.

I'm going to start with Windows assuming you are running uTorrent on it. I assume you don't need much explanation with uTorrent.

Starting the torrent
Continuing the torrent from Ubuntu
Continuing from Windows
The procedure should not be much different even if you use other torrent clients. There maybe some different terms they may be using but the basics are the same.

If you are a user of Ubuntu 8.10 or 9.04 you know how awful the built-in Network Manager is. It doesn't save your settings, and settings doesn't get applied so it's literary impossible to change your IP address using it.

One solution is to remove the Network Manager and edit the network configuration files manually. But there's an easier approach. You can install Wicd to do the configuration for you. This is an alternative to the default network manager which does it job right. It's really simple and straightforward to use.

A person I know began getting a "Device Timeout Error" when syncing his iPhone with iTunes. All his contacts, photos were being synced but the problem occurred when syncing Music and video. Both iPhone and iTunes were on latest software versions. The problem was fixed after following these simple steps.

Note. For this to work, your iPhone/iPodTouch has to be jailbroken.

I found the original solution from here. The solution is to delete /private/var/mobile/Media/iTunes_Control folder from the iPhone and sync with iTunes. This should work for both iPhone and iPodTouch.

I don't know the exact reason for this problem. But that person told he changed the USB port that he plugs the data cable. It may have something to do with changing USB ports or the machine you use to sync.
.
.
Posted by Ravin at 12:47 PM 1 comment:

This is certainly not the crown jewel of the Need for Speed series. But it sure has some unique features (good and bad). The game features a story just like the last few versions. The game has a big open world, police, lot of cars and few unique event types. Time of day is set to the so called Magic hour where you experience a unique yellowish lighting condition.

Graphics
I played this game with highest graphics detail and highest resolution. Graphics appear bit artificial. Shadows had to be turned off because they totally sucked! My system specs are here.

Here are some screenshots: 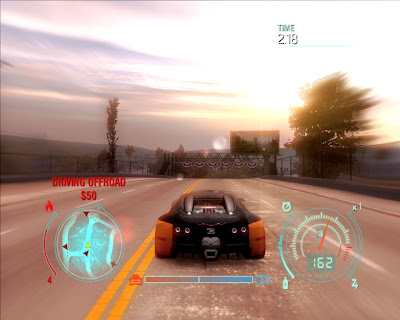 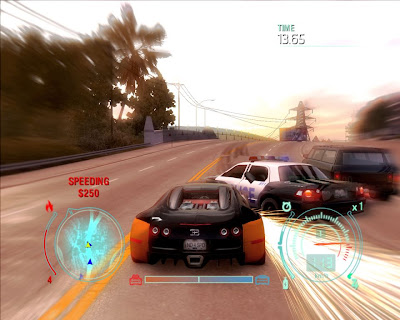 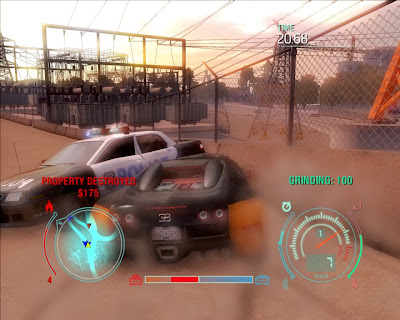 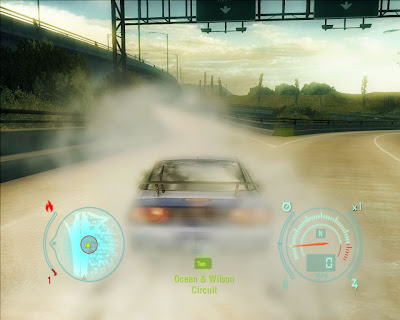 The famous Smoke engine from Pro-Street made it to Undercover. 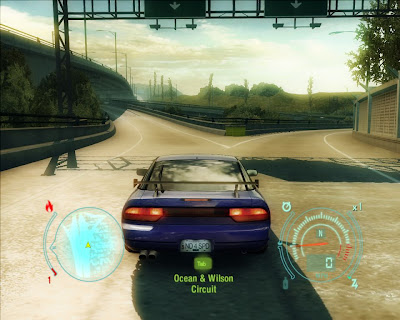 The biggest problem in the game graphics was crappy Shadows. They suck big time so I turned them off as most users have done. Even in highest quality shadow edges are ridiculous and unnatural.
.
.
Posted by Ravin at 12:10 PM No comments:

This is one of the best racing games I've ever played. The game has no story though so it gets boring after a few days of playing. The main reason I loved this game was its graphics and gameplay experience. Designers have built realistic collisions, car damage and Matrix style slow-motion camera movement into the game. Its basically like watching a simulation when vehicles collide.
The game takes place in a large city called "Paradise City". There is no police so you are free to roam around and do all the crazy stuff you can do with your car. Performing stunts plays a big role in the game. There are no menus to access races. Every junction in the city is a starting point for a race. One of the hardest parts is finding your way to the finishing line. There's no GPS or any guidance so you have to rely on the map which shows the dense road network of the city.
The cars that exist in the game do not exist in the real world. Game uses an imaginary set of car models with imaginary manufacturers. Nevertheless their car designs are truly superb.

Graphics
I played this game with highest graphics detail and highest resolution and graphics are very much realistic. My system specs are here. 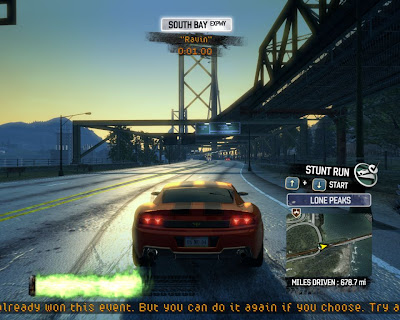 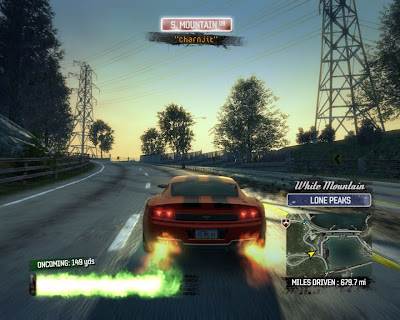 The game world is heavily detailed and you get to drive through cities, mountains and so many other different terrines. Game features realistic lighting where you can see shadows change when the sun moves throughout the day. 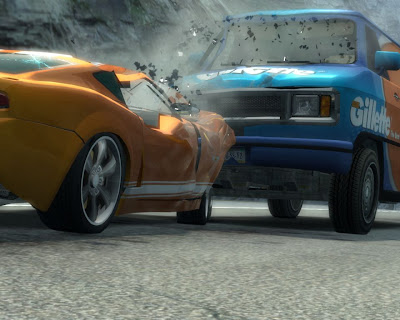 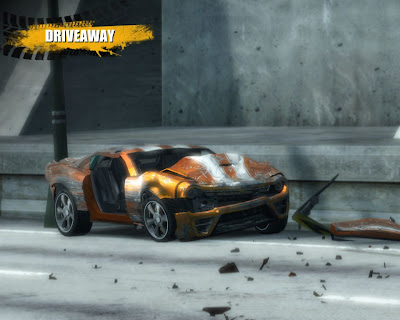 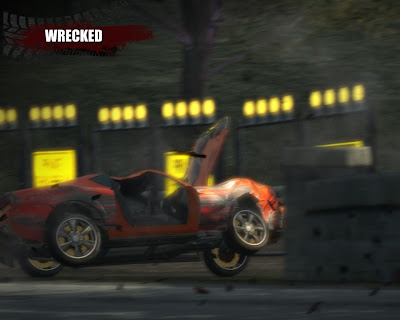 Literally every part of the car is breakable. You can actually see tires break and fly away when you hit it hard. 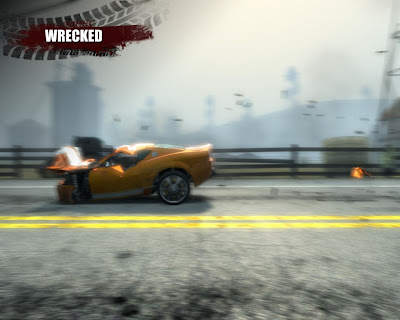 This is what you get if you speed too much! 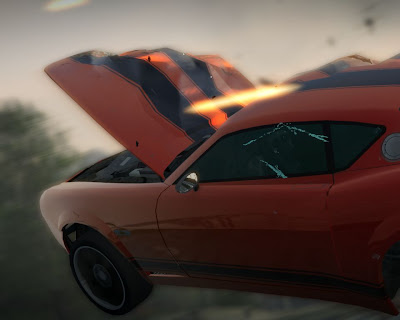 A moment captured in the middle of a jump. 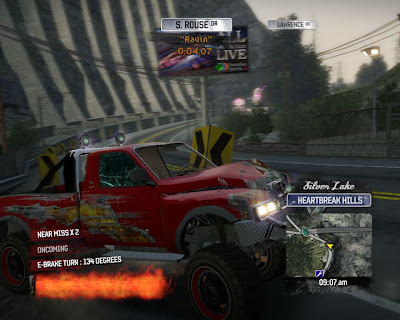 
The game gets bit repetitive since you get to play the same races again and again (with different cars) to get past levels. But you sure can enjoy freely roaming around the big city and performing stunts to your liking.
.
.
Posted by Ravin at 5:55 PM 3 comments: